Grown in Grey can trace it's roots back to the early 1990's as a Grey County Agriculture in the Classroom project. Two people, Agnes Diemert and Wayne McCausland, realised that there was limited agriculture oriented information available at local elementary schools. There was information available from various sources that could be used in the classroom, but it needed to get to the schools. They, along with help from the local Ontario Ministry of Agriculture and Food (OMAF) office formed the Grey County Agriculture in the Classroom committee.

Agnes and Wayne acquired agricultural related information and either took it or sent it to school libraries where it could be used by teachers as a reference. This process went on for a few years until Denise Edwards of the OMAF office encouraged the committee to initiate an effort to create another process by which teachers and their students could learn about agriculture. Several other county based groups had been running successful events that brought the students to a central location where they learned about agriculture directly from farmers themselves. Bruce county ran a similiar event in 1996 called "Roots of Bruce" that was held in Walkerton. At that time Denise left the Grey County office of OMAF and the idea of a Grey county version seemed to take a backward step. Another individual, Heather Parkin, came forward and agreed to chair a committee of the Grey County Agriculture in the Classroom project that would create an event called "Grown in Grey".

Throughout 1996 planning began for the first ever Grown in Grey. A location and time of year for the event were established. Local commodity organisations were contacted to enlist their support and educational consultants were brought in to give lectures and suggestions on how to present material to students.

On April 15th and 16th, 1997 at the Dundalk fairgrounds, the first Grown in Grey took place. Well over 600 grades 5 and 6 students from various schools in the region participated in an event that has continued each year since. Another successful event was held in Dundalk in April 1998. In 1999 Grown in Grey relocated to the Chatsworth Community Centre where it has remained. Each year between 700 and 800 grades 4 and 5 students attend Grown in Grey over the course of the two days.

In 1999 CKNX radio established the Farm Advisory Board (FAB) award. This award was established to acknowledge contribution individuals or groups have made throughout the current year to the betterment of agriculture. The first recipient of this award was Grown in Grey. At the May 1999 meeting of Grown in Grey, Murray Gaunt along with other CKNX staff presented the Award to then Chair, Grant Preston. 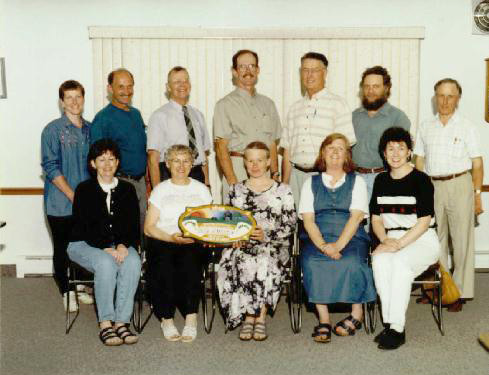 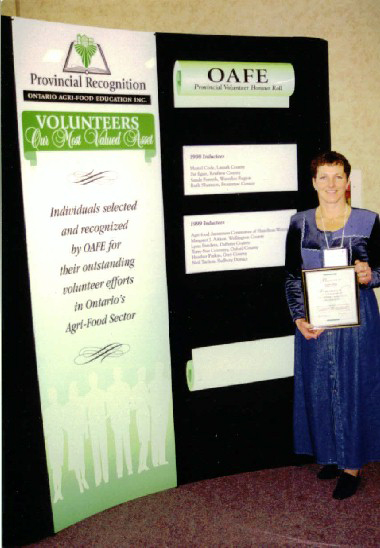 Heather Parkin, as a result of her spearheading effort as the first chair of Grown in Grey, was nominated for, and received a provincial recognition award from OAFE in 1999. A picture showing Heather with her award is shown at the left.